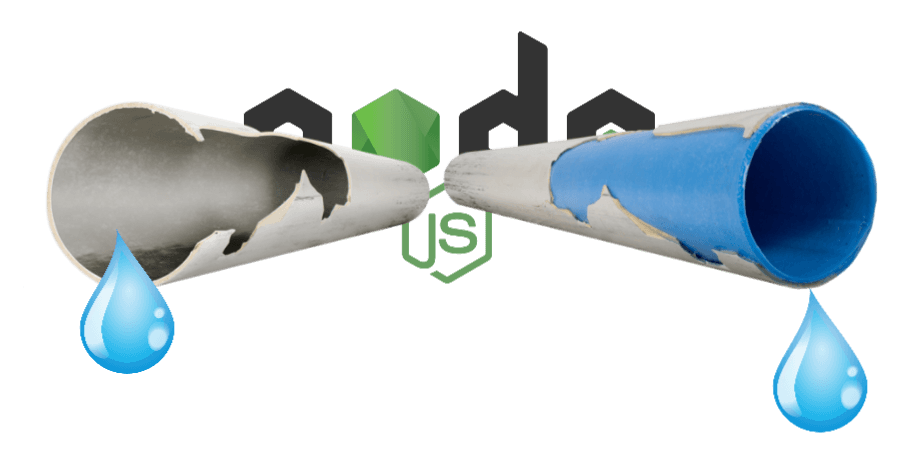 The following article comes as a transcription for my talk on "Memory leaks in NodeJs" that I've presented at our local JSMD Community.

When I speak about memory leaks, I have in mind:

when a programmer incorrectly manages memory allocations in such a way that memory that is no longer needed is not released.

There are many ways to leak memory, and no developer has immunity to this. Memory leaks are frequent in:

In this article the focus will be on your code and how can you leak memory in node.js

In node.js the status of your memory can be tracked with the following command process.memoryUsage() which returns the following JSON:

Streams are one of the most powerful features of node.js. Many devs are afraid of them but when you befriend them your node understanding skyrocket.

This simplest code may leak memory. The problem lays down in the pipe method which does not automatically destroy source or destination streams when an error occurs or on of the streams closes.

A more production-grade code will need to have the following structure:

For every failing case, we need to add the boilerplate to catch and destroy the streams.
Imagine if we have 3 or more streams that we need to pipe then we need to do a combination of cases to destroy every other stream, and very rapidly the amount of boilerplate code will be unmaintainable.

It is not Advisable to use pipe in production. Use pump or pipeline.

pipeline was added in Node v10.0.0 it is accessible from the stream namespace. Pump is an npm package compatible with every other node version, they both have the same interface.

Promises came as an abstraction to solve all the callback issues, but they are not entirely safe against memory leaks.

The most common example is to have promises which are never solved.

Assuming this will never be solved so the user will never receive the message Done. This code will leak file descriptors also the unSolvablePromise handler.

For particularly this case you will need to make sure your promise is resolved an easy fix can be the following one.

End of part one. Part two contains examples of leaking memory in event emitters, cached objects, and the tools I use for identifying and handling memory leaks in node.js

I hope that this article was helpful. If you like it, please share it with your friends and leave a comment; I will gladly answer all the questions.
×